As an independent, not-for-profit Catholic facility, we have a holistic approach encompassing the mind, body and spirit of the individual. We serve our residents in a holistic manner—spiritually, physically and emotionally. We are staffed 24 hours a day, 7 days a week with licensed nurses and STNAs to provide compassionate care to our residents and patients with concern and understanding for family and friends.

The mission of Mount St. Joseph Rehab Center is to provide quality care and service to our residents. The charisma of our home is to deliver care with compassion, love and understanding. We believe in the dignity, integrity and worth of all persons. At Mount St. Joseph Rehab Center we strive to improve or restore our residents’ quality of life and to help maintain physical, psychological, emotional and social functioning, as well as to assist in the closing of their lives with comfort and dignity.

The Sisters of St. Joseph of St. Mark, an independent Diocesan congregation, are bound together by their individual experience of call to be one with Christ. Nourished by liturgy, contemplative prayer and a simple community life, they strive to live faithful to the Gospel and faithful to the vision of their founder, sharing that Gospel and that vision with those to whom they minister.

In 1942 the Sisters purchased their current property at 21800 Chardon Road, and Mount St. Joseph was incorporated. The beginning was a labor of love. Through hard work and dedicated efforts, the Sisters raised sufficient funds to build the original nursing home by using the existing facilities on the grounds to cater banquets, weddings and dinners.

Building was completed in phases from 1958 through 1970 when the last phase was completed with a total of 100 licensed beds. After almost 70 years of service to our residents, another phase has begun with the completion of a state-of-the-art facility that will provide our residents with superior care in a home-like environment.

We thank our Heavenly Father for the many blessings bestowed on us, and we are especially grateful for the dedicated lay staff who help us maintain the high ideals, integrity and vision of the founder of Mount St. Joseph. 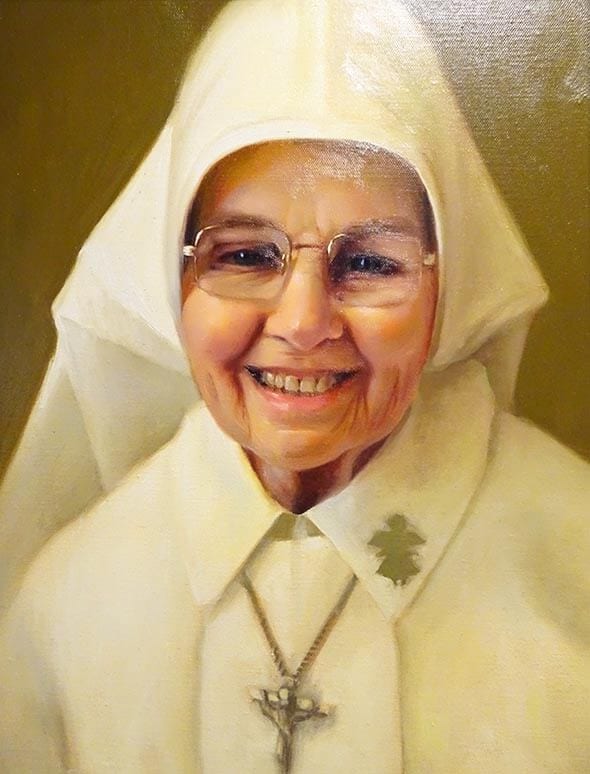 Mother Mary Raphael Gregg became a Catholic Sister on October 3, 1954, joining the Sisters of St. Joseph of St. Mark in Euclid, Ohio. At that time, there were around fifty sisters in the ministry and some of them, including Sister Raphael, were sent to nursing school where she first became an LPN in 1958. Later, in 1979, she earned her RN license and was awarded her BSN in 1992.

Committed to her mission as a sister and to her passion for long term care, Sister Raphael became a licensed nursing home administrator in 1999 after completing an internship at St. Augustine Manor. She eventually became the Administrator of Mt. St. Joseph and was later appointed Mother Superior of the order.

Mother Raphael was the guiding influence as the sisters replaced their nursing facility with a new, state of the art rehabilitation center in 2012. With Mother Raphael managing every detail of the design and construction of the new home, Mount St. Joseph Nursing Home became Mount St. Joseph Rehab Center continuing its legacy of caring long into the future.

Mother Raphael and her fellow Sisters have lived in separate quarters within the nursing home since the 1950s. Her lifetime commitment and dedication to her residents, to her fellow sisters and to her mission is truly remarkable.